This 'horny tree' grows wild only in the counties next to London, is scattered in the south and east generally and scarce or unknown in the north, in Scotland, Wales and Ireland: the most local of all the native trees. It is common in Europe and Western Asia and there are American and Japanese species. The nearest relations of Carpinus betula are the hazel and the birch, and not the beech, which it sometimes resembles at first glance.
The male catkins hang, with rows of umbrella-like bracts, and the female are erect at the end of the twig, with leaf-like bracts. The fruit has an unmistakable three-lobed wing. The leaves, which usually wait until early May, are folded along parallel veins, as are beech, but they are jagged- toothed instead of fringed with hairs, and placed more opposite than alternate on the twig. The trunk is smooth, grey, and always fluted or vertically streaked. Hornbeam casts a heavy shade, like the beech.
The tree was native to Northern Europe before the last Ice Age, and appears to have been abundant at some stages. It returned, perhaps only as an element of oakwoods in later postglacial times, always restricted.
S.E. William Morris, writing to the papers as an angry old man, in 1895, remembered from his youth, 'the biggest hornbeam wood in these islands' to have been in Epping Forest, which he knew 'yard by yard'. He inveighed against the 'experts of Epping' who he thought would ruin the forest by landscape gardening, tidying up the pollard hornbeams and straggling holly bushes. 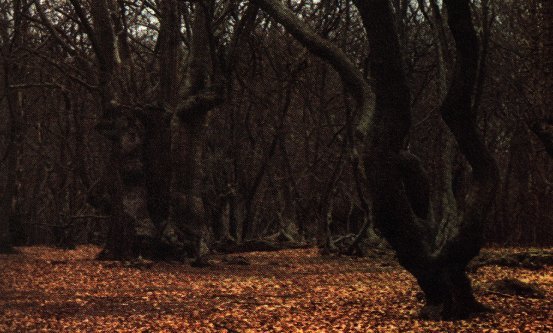 The hornbeams of Epping (and Loughton) are still there, trees as emaciated as the present shape of the forest on the map. They, and beeches amongst them, are a wierd monument to an old necessity; the lopping of firewood from the living tree: a might which had to be fought for by the inhabitants of Loughton. The commoners had to establish their rights by beginning the job on 11 November, starting just after midnight. The landlord tried to get them drunk and forgetful on the tenth. Eventually he closed off the land. A firewood merchant trespassed, in 1866, with his sons, and they were imprisoned. One of the sons died in prison, of pneumonia. The people of Loughton went to law, while the landlord intrigued and tried to bribe the trespasser to leave the area. The case became a cause celebre, seventeen landlords against the people of Loughton - who eventually won. Compensation of Ł7,000 they spent mostly on building a meeting place called the Loppers' Hall. The full account is given by J. H. Wilkes.
Epping Forest now belongs to the City of London.